An example paper printable bitcoin wallet consisting of one bitcoin address for receiving and the corresponding private key for spending.

Collision (two or more wallets having the same private key) is theoretically possible, since keys can be generated without being used for transactions, and are therefore offline until recorded in the blockchain ledger. However, this possibility is negated because the theoretical probability of two or more private keys being the same is extremely low. The number of possible wallets in any cryptocurrency cryptography is slightly less than the number of atoms in the universe[citation needed], a number so high that duplicating or hacking a certain key would be inconceivable.[5] [6]

In modern convention a seed phrase is now utilised which is a random 12 to 24 (or even greater) list of dictionary words which is an unencrypted form of the private key. (Words are easier to memorize than numerals.) When online, exchange and hardware wallets are generated using random numbers, and a seed phrase is asked to be recorded by the user, hence when access to the wallet becomes misplaced, damaged or compromised, the seed phrase can be used to re-access the wallet and associated keys and cryptocurrency en toto. [7]

A number of technologies known as wallets exist that store the key value pair of private and public key known as wallets. A wallet hosts the details of the key pair making transacting cryptocurrency possible. Multiple methods exist for storing keys or seeds in a wallet. [8]

Technical specifications of different browsers may or may not include features such as:

In addition to the basic function of storing the keys, a cryptocurrency wallet may also have one or more of the following characteristics. 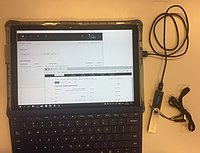 A simple cryptocurrency wallet contains pairs of public and private cryptographic keys. The keys can be used to track ownership, receive or spend cryptocurrencies.[11] A public key allows others to make payments to the address derived from it, whereas a private key enables the spending of cryptocurrency from that address.[12] 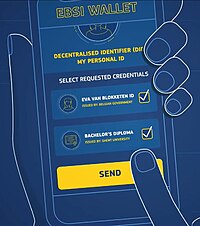 Providing an eID and a diploma and digitally signing the 'application form' with a crypto wallet app.

Some wallets are specifically designed to be compatible with a framework. The European Union is creating an eIDAS compatible European Self-Sovereign Identity Framework (ESSIF) which runs on the European Blockchain Services Infrastructure (EBSI). The EBSI wallet is designed to (securely) provide information, an eID and to sign 'transactions'.[4]

A deterministic wallet seed phrase of a crypto wallet.

A sequential deterministic wallet utilizes a simple method of generating addresses from a known starting string or "seed". This would utilize a cryptographic hash function, e.g. SHA-256 (seed + n), where n is an ASCII-coded number that starts from 1 and increments as additional keys are needed.[citation needed]

The hierarchical deterministic (HD) wallet was publicly described in BIP32.[15][16] As a deterministic wallet, it also derives keys from a single master root seed, but instead of having a single "chain" of keypairs, an HD wallet supports multiple key pair chains.

This allows a single key string to be used to generate an entire tree of key pairs with a stratified structure.[17] The single master string serves as the root of the tree, and the hierarchy scheme allows the private keys generated from a master private key to be themselves master private keys, which can in turn be treated as deterministic wallets in their own right.[18]

BIP39 proposed the use of a set of human-readable words to derive the master private key of a wallet. This mnemonic phrase allows for easier wallet backup and recovery, due to all the keys of a wallet being derivable from a single plaintext string.

Bitcoin Armory, an open source, Python-based, wallet-management application for the Bitcoin network, utilized its own implementation the hierarchical deterministic scheme and served as inspiration for the BIP32 standard.[19]

In a non-deterministic wallet, each key is randomly generated on its own accord, and they are not seeded from a common key. Therefore, any backups of the wallet must store each and every single private key used as an address, as well as a buffer of 100 or so future keys that may have already been given out as addresses but not received payments yet.[20][11]: 94

When choosing a wallet, the owner must keep in mind who is supposed to have access to (a copy of) the private keys and thus potentially has signing capabilities. In case of cryptocurrency the user needs to trust the provider to keep the cryptocurrency safe, just like with a bank. Trust was misplaced in the case of the Mt. Gox exchange, which 'lost' most of their clients' bitcoins. Downloading a cryptocurrency wallet from a wallet provider to a computer or phone does not automatically mean that the owner is the only one who has a copy of the private keys. For example, with Coinbase, it is possible to install a wallet on a phone and to also have access to the same wallet through their website.

A wallet can also have known or unknown vulnerabilities. A supply chain attack or side-channel attack are ways of a vulnerability introduction. In extreme cases even a computer which is not connected to any network can be hacked.[21]

When using a software wallet for receiving cryptocurrency, access to the receiving wallet is not needed—the sending party only need know the destination address, thus anyone can send cryptocurrency to an address. Only the one who has the private key of the corresponding (public key) address otherwise has access.

Retrieved from "https://wikicryptos.org/w/index.php?title=Cryptocurrency_wallet&oldid=4960"
Cookies help us deliver our services. By using our services, you agree to our use of cookies.